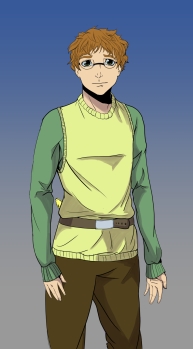 Godwin is the child of one of the most prodigious recorder players of all time: Lucinda Corelli. Showered in motherly affection, and praised for his prowess with a recorder, Godwin grew up an awkward, bookish child.

After losing his mother, Godwin was at a loss– that is until his idyllic pastoral hamlet came under attack by a pack of rampaging Hellboars. The boars laid waste to the village, and when they threatened his sister, Godwin picked up his mother’s orichalcum recorder, and played the creatures into submission.

This act of heroism caught the attention of the Unconquered Sun, who chose Godwin as a performer and a champion. It was not long after this that Godwin made his was to the city of Djao Wei, where he began to get caught up in much more than the performance arts.

Rizzo is a sorceress and a troublemaker, well known for the barfight she started with a single stone’s throw that lead to her exaltation. The tidal waves and broken earth the fight left have given her a reputation as someone who can get something done, even if there is a bit of collateral involved.

She is rarely seen without her loyal wolf, Qui Gon Gin ‘N Juice. 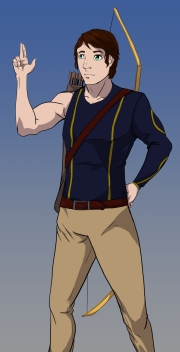 Ajax is a master investigator and archer. In moments of intense combat, Ajax is known to become exceptionally intense, which sharpens and elongates many of his features. His keen insight and attention to detail have gotten him out of a number of otherwise deadly scrapes.

A former merman banished from his ocean home now walks unfamiliar territory searching for a lost friend. Every bare step upon the earth brings pain to him, but he is not unfamiliar with the cost of personal sacrifice. With Ajax and Godwin as his only friends, besides the animals he sneaks in through the pet door, Ariston will continue to fight for the greater good. But in a city that believes him an unwanted, even dangerous, outcast, who can he really trust?

Swallows of the South Swallows of the South is an actual play podcast featuring trained performers and improvisors playing the Exalted 3rd edition roleplaying game with a focus on character interaction, story development, and a spot of humor. We follow a small group of the Sun's Chosen in the city of Djao Wei, their choices, consequences, and the things that will always catch up to them.